Solstice – The Jewel of the North

Solstice is a mystery visual novel from MoaCube, which previously brought us Cinders, one of my all-time favorite games. It’s been highly anticipated by myself and others since being announced about three years ago. As advertised it replicates the immaculately painted art style of Cinders, with the addition of small animations that enliven the sprite interactions. The writing style is similar to Cinders, but much more polished. With complex characters and a more complex plot, it’s at least as engaging and replayable as its predecessor, with the promise of good and bad ending in multiple variations each.

The central conceit of Solstice is its setting, a magical eco-bubble that lives in the heart of a frozen tundra, like a massive hothouse. The city, known only as the Jewel of the North, is the source of mystery and intrigue that pushes the plot along. Throughout the game, it is almost invariably referred to only as “the city”, which serves to underscore how central it is to the narrative, as well as to the lives of the characters living in it. Their suffering, whether self-inflicted or at the hands of the ruling merchant families, always seems to trace back to the city and its strange, compelling power. In this way, it is set up to serve as the game’s speechless but menacing antagonist.

END_OF_DOCUMENT_TOKEN_TO_BE_REPLACED

Zen Cho -Sorcerer to the Crown 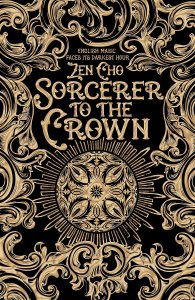 I read Sorcerer to the Crown, beginning to end, in under three days. Not a usual occurrence for me, not since my high school years. There’s a particular joy to be had in devouring a book and not being able to set it down, and this is exactly the sort of book you want for this type of adventure. Light without being frothy, romantic without being cloying, and effortlessly funny. My favorite stories are the ones that have well-balanced measures of comedy, drama and action. It’s a pretty difficult trick, but I think this book manages it remarkably.

The most obvious draw of Sorcerer to the Crown is the two protagonists. Zacharias Wythe, the eponymous sorcerer, is cautious, withdrawn, abstract-minded and secretive. As the child of African slaves adopted by an English gentleman and raised to become the first black magician in England, he has better reason than most to be reserved, not to say insecure. Prunella Gentleman is a plucky orphan living in a girls’ school under the sufferance of a family friend, but instead of being filled with gentle forbearance, she is as pragmatically ambitious a heroine as I might want. The contrast between the two starts paying off almost as soon as they meet.

Prunella is a woman who knows how to work the system. She wants her independence, but independence means cash and she is not above acknowledging that the most realistic way for a pretty girl to come into a fortune is to marry well. Zacharias is almost as confined as she is by the walls of convention and expectation that box him in on every side, but of a naturally ideologic temperament. His foster-parents, alive and dead both, struggle to deal with this very impractical tendency of their son. Zacharias is a man who can ill-afford lofty ideas of social change, but for all his soft-spoken civility, he as just as stubborn as a protagonist is expected to be.

And so, the Sorcerer to the Crown takes it upon himself to champion the cause of women’s education — magical education, naturally. By the cosmic forces of narrative coincidence, his first meeting with Prunella convinces him that suppressing women’s magic is a great evil. She has natural talent and is remarkably competent, which would seem to make her an ideal candidate for his apprentice. Prunella, though, is not very academically inclined. Still, she doesn’t scruple to pretend a passion for magical research to draw Zacharias into the thick of her machinations.

Meanwhile the plot rages on, pitting Zacharias against his colleagues in a fight for his position and his life. The admixture of politics and magic feels natural and compelling, as the poor beleaguered Sorcerer Royal must contend with diplomatic crises involving foreign witches, while simultaneously negotiating the relations between humans and fairies that ensure England’s access to magical energies. He seems set up to fail from every quarter, and all the while he runs afoul of his artful young student. Superficially it seems that he and Prunella are at cross-purposes, but this is an unusually compelling variation on a clash of personalities that tapers into attraction and genuine, mutual respect.

It is a feat of sheer magic to get me to read a book cover to cover without once resenting the inevitable romantic subplot. I found Zacharias and Prunella’s non-flirtations charming throughout the story. Never did I feel that they weighted the narrative or slowed it down. Their relationship progressed organically and I found its conclusion immensely satisfying, instead of grudgingly accepting it the way I ordinarily would. Even Zacharias’s evasively-worded confession was more endearing than irritating. I especially enjoyed Prunella’s utter confidence in her own powers of attraction. By contrast, Zacharias was as comically unaware of his own appeal as the most flagrant Mary Sue. It’s this kind of subtle twist that makes the book consistently funny and surprising.

Sorcerer to the Crown came highly recommended to me (from various sources), but I can honestly say that it exceeded my expectations. An instant classic, and one that I’m certain I’ll want to reread on a regular basis.

This entry was posted in Reviews and tagged book reviews, fantasy, romance, sorcerer to the crown, zen cho.

The Traitor Baru Cormorant is a secondary world fantasy novel, taking place in an unmagical world dominated by a sprawling colonial empire.

Baru Cormorant is a brilliant native child, taken from her family by the Empire of Masks in order to be raised in a residential school on Imperial values. Her voracious mind devours everything they teach her, mathematics and astronomy at the price of doctrine and propaganda. The ruling principle of the Masquerade is “social hygiene”, an all-consuming style of eugenics that deplores sexual deviancy and obsesses over optimizing the mixture of racial traits. A reader might be jarred into attention by the absence of racial supremacy as they’ve come to expect it, replaced by a creepy pseudo-scientific fetish for “hybrid vigor” as it’s sometimes called.

The opportunities presented by a Masquerade education are irresistible to young Baru. She is nurtured by a patron who recognizes her curiosity and keen intellect, who pushes her to excel and distance herself from her family and her roots. This sets Baru on an ambitious course, to become an Imperial bureaucrat and learn the secrets of power that brought low her homeland and split up her family. She is defined as much by this ambition as by her cool, calculating nature and inordinately long view of the future.

One of the most charming and fascinating things about Baru and the Imperial Republic respectively, is the centrality of economics in their relationship. Baru gains her mentor’s attention when she comments on his commerce practices: he buys in Imperial paper notes, but sells only for gold. This is her introduction to the Empire’s most potent strategy of colonization, and presages her future position as an Imperial accountant. The centrality of economics to Imperial reign makes this a position of great power, and Baru’s natural intellectual talents make her ideally suited to it.

The title of the book (just The Traitor in the UK release) is not an idle threat. Baru is a character filled with contradictions and the most important of these is how far she is willing to go in service of her goal, to protect her homeland and her family from the Masquerade. Loyalty, in the world of the Masquerade, leads inevitably to treachery. The narrative is not at all forgiving on this point. Baru’s goals may be just and true and even noble, but they are in no way pure, and their goodness can in no way protect her from the consequences of her actions.

Baru’s treacheries span the book’s entire character arc and are directed every which way. There is no one in her life, including herself, that does not in some way suffer from her deception. The daughter of a mother and two fathers, and herself a “latent tribadist”, she still chooses to function under the Masquerade’s system of “social hygiene”, with the full knowledge of the gruesome interrogation techniques and punishments devised to enforce it. She lies to herself throughout, in the inevitable tension between her distant goals and her immediate actions, and in evading the many spies set on her by many political interests. The Masquerade, she helpfully explains at one point, is a “cryptarchy”, the rule of secrets.

Read this book. It’s clever and touching and suspenseful, and the ending left me craving more. I can’t remember the last time I picked up a book and got so exactly what I was expecting, and what I wanted. Bright and cold and calculating, Baru is exactly the kind of female protagonist I am always looking for.

This entry was posted in Reviews and tagged book reviews, fantasy, seth dickinson, the traitor, the traitor baru cormorant.

And so, 2015 is over. It’s been an interesting year. I’m not certain whether I can comfortably look back on 2015, but I feel confident in saying that I look forward to 2016, and that’s no mean feat. My writing goals for the past seven months have mainly been “write!” and so it’s difficult for me to assess how well I’ve met them. I accepted some new challenges and took some new risks.

Here are a few things I am happy about, this year-end:

END_OF_DOCUMENT_TOKEN_TO_BE_REPLACED

This entry was posted in Blog Matters, Writing Matters and tagged 2015 in review, 2016 goals, writing goals, year in review.