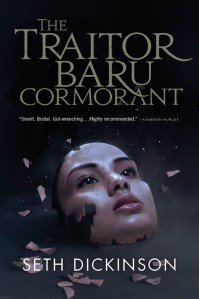 The Traitor Baru Cormorant is a secondary world fantasy novel, taking place in an unmagical world dominated by a sprawling colonial empire.

Baru Cormorant is a brilliant native child, taken from her family by the Empire of Masks in order to be raised in a residential school on Imperial values. Her voracious mind devours everything they teach her, mathematics and astronomy at the price of doctrine and propaganda. The ruling principle of the Masquerade is “social hygiene”, an all-consuming style of eugenics that deplores sexual deviancy and obsesses over optimizing the mixture of racial traits. A reader might be jarred into attention by the absence of racial supremacy as they’ve come to expect it, replaced by a creepy pseudo-scientific fetish for “hybrid vigor” as it’s sometimes called.

The opportunities presented by a Masquerade education are irresistible to young Baru. She is nurtured by a patron who recognizes her curiosity and keen intellect, who pushes her to excel and distance herself from her family and her roots. This sets Baru on an ambitious course, to become an Imperial bureaucrat and learn the secrets of power that brought low her homeland and split up her family. She is defined as much by this ambition as by her cool, calculating nature and inordinately long view of the future.

One of the most charming and fascinating things about Baru and the Imperial Republic respectively, is the centrality of economics in their relationship. Baru gains her mentor’s attention when she comments on his commerce practices: he buys in Imperial paper notes, but sells only for gold. This is her introduction to the Empire’s most potent strategy of colonization, and presages her future position as an Imperial accountant. The centrality of economics to Imperial reign makes this a position of great power, and Baru’s natural intellectual talents make her ideally suited to it.

The title of the book (just The Traitor in the UK release) is not an idle threat. Baru is a character filled with contradictions and the most important of these is how far she is willing to go in service of her goal, to protect her homeland and her family from the Masquerade. Loyalty, in the world of the Masquerade, leads inevitably to treachery. The narrative is not at all forgiving on this point. Baru’s goals may be just and true and even noble, but they are in no way pure, and their goodness can in no way protect her from the consequences of her actions.

Baru’s treacheries span the book’s entire character arc and are directed every which way. There is no one in her life, including herself, that does not in some way suffer from her deception. The daughter of a mother and two fathers, and herself a “latent tribadist”, she still chooses to function under the Masquerade’s system of “social hygiene”, with the full knowledge of the gruesome interrogation techniques and punishments devised to enforce it. She lies to herself throughout, in the inevitable tension between her distant goals and her immediate actions, and in evading the many spies set on her by many political interests. The Masquerade, she helpfully explains at one point, is a “cryptarchy”, the rule of secrets.

Read this book. It’s clever and touching and suspenseful, and the ending left me craving more. I can’t remember the last time I picked up a book and got so exactly what I was expecting, and what I wanted. Bright and cold and calculating, Baru is exactly the kind of female protagonist I am always looking for.

This entry was posted in Reviews and tagged book reviews, fantasy, seth dickinson, the traitor, the traitor baru cormorant.